When was the last time you were SUPERHIGH? What made you want to go down the rabbit hole? Do you treasure sweet memories of sensations beyond love, joy and ecstasy, or are you haunted by lingering phantoms of paranoia? Most of us have experienced the spontaneously unpredictable effects of one drug or another – nicotine, alcohol and painkillers being the most common. In fact, most of us don’t even consider these to be drugs any more, they have become like bread and butter to us. And yet, bread and butter are far less exciting.

I’ve been a smoker for years and I can’t tell you how many times I have thought to myself, while actually rolling my cigarette, Why the hell am I doing this? The amounts of time I’ve rolled my umpteenth cigarette of the day and it tasted like absolute shite is nauseating. And still I’ll keep on smoking it. There are days, however, on which I light the trusted cancer-stick and feel light-headed, shamefully relaxed and, here’s the irony, as if I’d just taken a long cleansing breath during yoga class. Ultimately, those are the moments we all aim for, right? Whether it’s with a deserving bottle of red wine or a cheeky intake of Espidifen to cure a vaguely existent headache – we are looking for an out, an urgent break from every day life.

The above mentioned routine sins may be a bit too suave to disconnect entirely; ask any head or otherwise knowledgeable recreational drug enthusiast for the speediest routes towards detachment and they’ll have a whole list prepared: MDMA, Speed, LSD, Cannabis, Ketamine, Peyote, Salvia, GHB, Cocaine, Heroin – oh, but the choices! Turn the whole thing around and ask a contently glowing Buddhist or Yogi for their escapes and they’ll tell you some mad shit about breathing and mantras. They claim they can get just as high without having to inhale nothing but the air surrounding them, drinking in nothing but life and snorting nothing but laughter. Pretty wacky, huh?

How to completely disappear – This has been the burning question on the mind of German artist Boris Eldagsen for a very long time. His works explores the inner reality through external forces, which he captures both on film and photographs, resulting in an open gateway to the land of dreamscapes. His latest project in collaboration with Sabine Taeubner tries to go beyond the limitations of understanding another’s altered reality through the use of drug-free as well as drug-induced highs. SUPERHIGH proposes six drug-free highs which are judged by a jury on LSD, MDMA and Cocaine in round one, and Cocaine + Ketamine, LSD + MDMA and Speed + Marijuana (and later + Salvia) in round two. The drug-free candidates rate their achieved highs on a scale of one to ten and are observed by the jury through the entire process.  This mockumentary stands right in the line of fire as it explores the capping showdown between two distant approaches aiming for the same end result. Their exhibitions, screening said mockumentary,  invite visitors to test the proposed drug-free highs themselves and throw in a Tripsitter as an added bonus. Who would have thought an exhibition could be so lively and prickling?

Boris and Sabine took the time to share more about this project with me. Welcome to your ultimate reality show from the homeland of human experience! 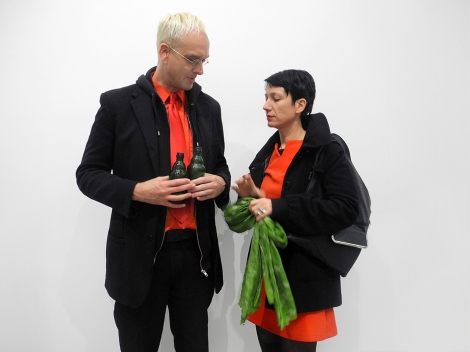 When did you first team up together?

Have you worked on other projects before?

Sabine: I modelled for Boris in 1998.I was dressed like Little Red Riding Hood, standing in a forest, folding my  tongue back and forth.

When it clicks it clicks. We are a perfect match when it comes to absurdity and weird ideas.

How did the concept of SUPERHIGH first come about?

Boris:   My main subject as an artist is ‘how to disappear completely‘, explorations of a timeless human phenomenon: the urge to lose one’s self. In referring to this phenomenon as either ‘Mysticism’ (religion), ‘Transpersonality’ (psychology), ‘Desire to Escape’ (Aldous Huxley) or ‘Transgression’ and ‘Unproductive Consumption of the Surplus’ (Georges Bataille), there has always been a redemptive mode to being human. This redemption can come in a positive or negative form, upward or downward – as we can all disappear into something larger or smaller: religion, drugs, mass events, love, sex, extreme sports, hypnosis etc. The list is endless, depending on time, culture and imagination. Sabine and I went through the list and decided to dig deeper into the drug subject.

Sabine:   I was interested in questioning ways to escape everyday life. Every addiction is a means to get out of the daily unease. Some we are conscious of, some we need to reflect on more. And this is what we started with.

Is SUPERHIGH a means of discouraging drug use?

Boris: No. It is a clash between active and passive forms of highs and also an absurd human experiment. We never intended to judge or support any political position on drug use. We provide information and let people make their own choices.

Sabine: SUPERHIGH should encourage you to get information, reflect and experiment, whatever you want. When you observe and make an effort to understand things, you will quickly find out whether you want to give something a go or not. With drugs it’s the same. 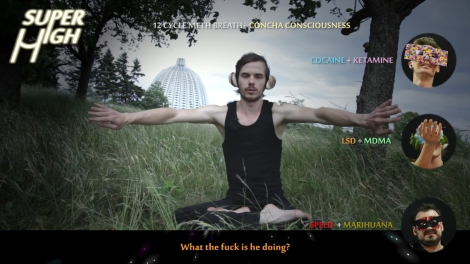 What are your favourite ways to get high without drugs (that you have tried)?

Sabine: Visual Highs have the strongest effect on me, sometimes it lasts for days.

What are your favourite non-drug highs proposed in your Highbrary?

Do you think drug-induced highs and drug-free highs can achieve the same standards in terms of visual effects?

Boris: Give me 5 more years to experiment with this.

Sabine: I believe yes. It is only a question of training and willingness. Sure you will be faster driving a car, but if you exercise daily you might rival it. 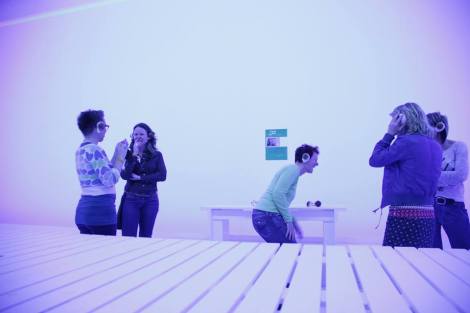 What have the overall reactions to this project been so far?

Boris: The project is still young. So far, people love it all across the globe. We had reviews from India, Australia, Italy, Germany, Holland. You will be the first to carry the SUPERHIGH torch into Spain.

Sabine: Seeing as I live in the woods I seldom get feedback. People here don’t talk much.

Which Superhigh have most people voted for so far?

Why do you believe the combination of two natural Superhighs are more effective than one?

Boris: We didn’t know before, that’s why we tested it. SUPERHIGH was and is a human experiment.

The more the merrier.

How does the jury’s taking of drugs affect their view of the proposed Superhighs and why was it important to you to test them this way?

Boris: It was important to create a clash between drug-free and drug-induced highs, with the drugs being the judges in this mockumenty. Having drug-free highs judging drugs would have been only half the fun. Of course drugs affect anything you do. But the main thing we were interested in was the impossibility to judge or rate anothers internal experience.

How were the jury members and candidates chosen?

Sabine: When looking for candidates we first asked all my old artist friends, all of which refused our invitation except for the Binaural Beatbox girl and the crazy guy painting the Rhine (one of Boris’ friends).They stated that they were ‘too old for this shit’. So we turned the search for candidates into a official student job with a contract and a fee. Many were ‘young and needed the money’. We preselected 5 methods for each of them, and they had the final choice. We loved all of our candidate’s choices and performances.  Since our recording, one of them (the Whirling Dervish) became famous as a singer of a psychedelic rock band and performed at SXSW. For the jury we looked amongst friends and friends of friends. We ended up choosing an actor, a radio lady and a painter from Leipzig.

Do either of you have experiences with drugs and if so, which Superhigh would be closest to what you felt during your own personal drug experiences?

Sabine: Doing the Salvia research and watching all those videos, I felt sick for three days, as if I’d been partying wildly.

Would you say that most of the natural highs proposed are relatively unknown?

Boris: As they all come from ancient mystic and religious traditions, they could and should be known by today. The knowledge is openly available. But as they are active highs, that demand a certain effort, they are less attractive to our right-here-and-now western attitude that prefers to buy a quick high by dropping a pill; funny how materialism also kicks in here.

Boris, where does your fascination with “redemption” stem from?

Interesting how you would pick this term instinctively. I was working with that term years ago, when I tried to nail down what it is that I am doing. It then dissolved into ‘how to disappear completely’, an umbrella that works better for me, because it is broader and incorporates other religious and non-religious traditions. For me, people want to disappear into something bigger or smaller in order to forget mortality.

One response to “Have you found your SUPERHIGH?”